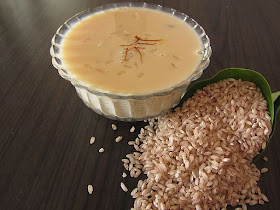 
Whenever we reason the cultural practice, especially Indian culture on 'Why we do what we do?', we always come across some fascinating stories. Here I would like to share with you a mythological story blended with mathematics, culture, sweetness all in one.

This story is about Paal Payasam or milk kheer, which is popular in South India. It is made from rice, milk, sugar or jaggery. The paal payasam, served as prasadam at Ambalappuzha Sri Krishna temple in Kerala, South India has a legend behind it. According to the legend, once there was a king who ruled that region and he was great enthusiast of chaturanga (or chess). One day a traveling sage was challenged by the king to play the chess. To motivate the opponent the king offered any reward that sage could name. The sage modestly said that, being a man of few material needs, all he wished was a few grains of rice. The sage said to the king, "Let the chessboard decide the amount of rice, as we play. One grain of rice shall be placed in the first square, two grains in the second square, four in the third square, eight in the fourth square, sixteen in fifth square and so on, for all sixty-four squares."

Upon hearing the demand, the king was unhappy since the sage requested only a few grains of rice instead of other riches from the kingdom which the king would have been happy to donate. He requested the sage to add other items to his prize but the sage declined. Finally the game started. The king was no match for the sage and he lost the game.

The king begin a man of word, he immediately ordered for a sack of grain to measure it out as per the sage's request. As he started adding a grain of rice to the chess board, the king soon realised that the amount of grain is not small as he had initially thought. While the first square had only one grain, tenth square had 500 grains and twenty first square had more than one million grains. By forty first square, it reached more than one trillion grains. The king realised that, if he had totalled the rice grains of entire kingdom and also neighbouring kingdom, it was not enough to give it to the sage.

The sage then revealed his true identity. He was none other than Lord Krishna himself! Lord Krishna told the king that he will take the rice in installments and asked him to make arrangements to prepare paal payasam at the Ambalappuzha temple everyday.  From that day onwards, Paal Payasam is served in Sri Krishna Temple in Ambalappuzha.

What could be a better story about 'Exponential growth'! Hope this story will definitely delight the mathematicians.

The Ambalappuzha Temple is dedicated to Lord Krishna, in his form as Parthasarathy, Arjun's charioteer. This temple is directly associated in Guruvayoor Shri Krishna temple (which is estimated to be more than 5000 years old). During the raids of Tipu Sultan in 1798, the idol of Guruvayoorappan (form of Lord Vishnu worshipped mainly in Kerala) was brought to Ambalappuzha temple for safe keeping and was kept there for 12 years. There is a believe that Guruvayoorappan reaches Ambalappuzha temple daily at the time of Paal paysam nedyam (offering to God) to have it.

Though implausible and fanciful this story may appear to the modern mind, there is always a grain of truth to all myths and legends. 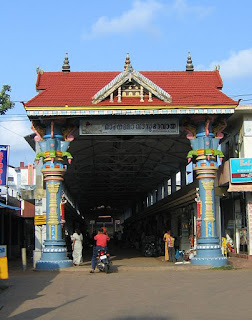 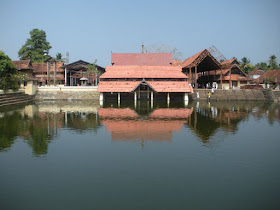 By Pradeep717 (Own work) [CC BY-SA 3.0 or GFDL], via Wikimedia Commons
Ambalappuzha Temple